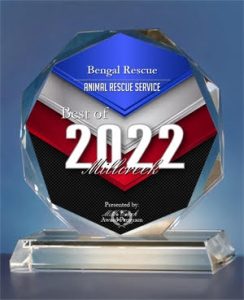 We are pleased to announce that Bengal Rescue has been named “Best Animal Rescue Service” by the city of Millcreek, Utah. We’re grateful to be recognized and to receive this honor!

We’re thrilled to announce to our followers that Bengal Rescue has been recognized by Guidestar with the Platinum Seal of Transparency!
This is a really huge honor, and we went through a lot of hoops to achieve this. Transparency is extremely important to us here at Bengal Rescue.
We take this business very seriously, and we are grateful to all of our supporters, followers, adopters, and partners for your support.
Thanks from all of us at Bengal Rescue.

On July 24 Cantwell, along with her partners Celia Child and Susan Leroy, launched Bengal Rescue, a new nonprofit in the Utah animal rescue. Their plan is to restore the health of cats that pass through her doors, and also to educate owners about these unique and sensitive housecats.

“As a Bengal cat owner, I know they are sensitive cats that I like to describe as ‘extra,’” Cantwell said. “You really need to be on your toes when you own Bengals, because they are a lot needier, even though they are very athletic.”

Bengal Rescue, which is based in Salt Lake City, works with people and organizations that rescue, transport, foster and care for the cats, and it helps current owners place cats in new homes, she said.

“We also rescue cats from shelters and place them into foster care while we search for their forever home,” Cantwell said.

The nonprofit’s website is also designed to provide resources to owners of Bengals, toyger and chausie cats, she said.

“I operate like a helpline for people who are struggling,” she said. “So I have set up an informative website that addresses feeding, litter-box, medical and behavioral issues, to retrain humans so they can keep these cats in their homes.”

“We just want to cover the cost of medical services for cats that come through our program,” she said.

“He’s a superhero in animal medicine,” she said.

The idea to provide these resources stems from Cantwell’s 10-plus years working at Nuzzles & Co., formerly known as Friends of Animals Utah.

“I got tired seeing people adopt a kitten from a breeder, hold on to the cat for four or five years and then drop it off at a rescue or shelter because the cat was having ‘urinary issues’ by not using the litter box,” she said. “With my experience and education at Nuzzles & Co., I knew this was the reason most cats got surrendered, but Bengals seemed to have a higher rate of problems, and I wanted to find out why.”

The more Cantwell worked with Bengals, the more she found the issues resulted from owners’ errors.

“The owners need to know that these cats need a home that has great litter-box maintenance and specialized feeding,” she said. “These cats also need to be on a high-protein, and high-moisture diet. In fact, the cats I know who live the longest are being fed a raw-food diet.”

Bengal Rescue is a small part of a large community of Bengal cat enthusiasts that includes other rescue organizations, adopters, fosters and behavioral and medical experts located across the country.

“I work with the Bengal Rescue Network on the East Coast, and the Great Lakes Bengal Rescue that is located in the Midwest,” she said. “We share leads. So if they hear from someone in California or Utah who are looking for a cat, they will refer them to me, and if I hear of someone from the central United States or the East Coast who wants a cat, I’ll refer the inquiries to them.”

Cantwell’s foray into animal rescue started in the fall of 2009, a couple of months after she moved to Park City from San Jose, California.

“I was introduced to rescue through a Friends of Animals Utah ad in The Park Record for a Bengal cat named Cisco who was only 10 months old,” she said. “I thought it was interesting that there was a rescue here, because I already had two Bengals.”

Cantwell saw the ad on her anniversary and told her husband all she wanted was Cisco. The next day they rushed to the adoption center, adopted Cisco and renamed him Maxy.

“I looked around and saw all of these cats and, because I was new to the community, I thought I should volunteer and spend time with them,” she said. “That’s where it all began, and I’m happy to say that Maxy is the face of Bengal Rescue.”

We’re pleased to announce our shiny new rescue –  Bengal Rescue. We hope to become your “go-to” place for practical tips and guidance, on everything Bengals.

Whether you’re looking for a new Bengal Cat, have questions about your current cat, or even are facing difficulty keeping a Bengal, we’re here for you.

We hope that you’ll check back often for updated articles and guidance. Our Leaders have over 50 years of experience working with Bengals, so this is the place where you can count on great information. We hope that we’ll become a trusted friend for you and your furry family member.

If there are any topics you’d like to see us cover, please don’t hesitate to reach out to us at info@bengalrescue.org.

We’re glad to have you here!

Thanks from all of us at Bengal Rescue!